Paul Ricard created his anise drink 80 years ago. Nothing has changed in the recipe ever since, however the former small firm has turned into a large group. How did the little brand from Marseille spread all around the world? Thanks to all the communication techniques. A fine lesson in advertising exhibited at the Musée de la Publicité.

From the entrance of the exhibit, the tone is set: it is yellow! The typical yellow, the one that speaks of the sun, the one of the Ricard brand. In every room of the Musée de la Publicité, big yellow blocks with round edges – following Ricard’s graphic codes – present the items. Walls are left to screens. The atmosphere is already there.
This exhibition is dedicated only to the Ricard brand and gives a good place to the actions of its creator Paul Ricard. Defying the laws, he has drawn from his imagination and creativity the necessary incentives to communicate about Ricard.

The first room is dedicated to art and to the beginning of the saga.

The beginning
As a young adult, Paul Ricard has a passion for chemistry and he studies at Les Beaux-Arts in Marseille. Pastis is a specialty there. As it is made by barmen, its taste is neither stable nor totally satisfactory. Paul Ricard creates his own recipe in 1932, after one year’s experiment. With his father’s help, their first factory is built in Sainte-Marthe area.

The premise of success
In 1936, the first paid holidays will promote him and his company, because they go well with holidays – the sea – the sun. Success is already on its way.
When he creates his drink, Paul Ricard tries to have the best possible odds.

The hard legacy of absinth
In 1940, the law forbids drinks above 16° proof. At the end of World War II, the damages caused by absinth are far from being forgotten: the ban is lifted only for alcohols up to 40° proof, so for Ricard, the problem remains. It is not until May 1951 that pastis with its 45° will be restored, after years of battles.

Bans
The texts of the first room largely mention the different bans imposed along Ricard history, because Paul Ricard had to face many constraints directed at alcohol and its advertisement, well before the Evin law. But he was smart enough to transform each constraint into some particular strength, to dig out his inner creativity and involve more reflection and will-power to communicate about his brand.

Art
“When the ephemeral side of advertisement meets the timelessness of art”.
Does his training at Les Beaux-Arts lead him to break new ground? Paul Ricard forges bonds with artists. He lets them play with his brand, so visual and mass-market. This block presents works by César, Christian Lacroix and Gerard Schlosser. An entire wall presents Guy Lemon’s wallpaper, a montage of advertisement cutting ups of brands in yellow, blue and red. It’s up to you to find out Ricard in this maze! 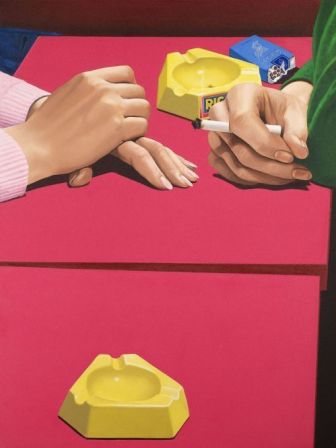 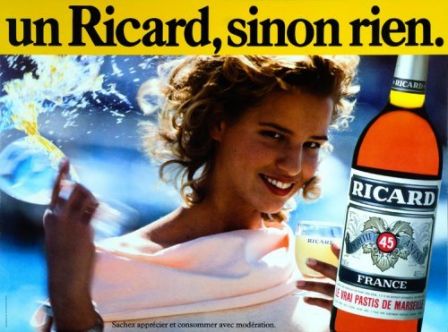 Not to copy others, Paul Ricard rapidly decides to have everything designed in-house: advertisements, posters, by-products. He creates ceramic items with craftsmen from Marseille. This diversity comes from his will to be massive to be visible everywhere.

The brand involvement in events is tentacular. Everything starts with the Tour de France and music in 1948: Ricard S.A. is then the first company to organize a concert tour, with Darcelys and Tino Rossi. Then, the brand gets linked with cinema, races (single-handed Transatlantic race, car race with the Paul Ricard circuit), music (Ricard S.A. Music Tour). Even before the company becomes a group, it also goes into more corporate actions, such as the Oceanographic Institute, in 1966, or the Fondation Culturelle Paul Ricard (Cultural Foundation) in 1967. 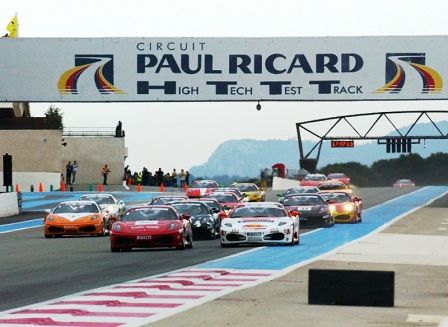 The other side of below the line communication is the by-products. The Ricard Internet site claims that as soon as 1932 Paul Ricard was the pioneer of communication by means of promotional products. Let’s put things back into place: he did not invent the concept as “New Year’s Greetings” cigar clips were found in 18th England and 1918 saw the birth of promotional pens. But, it is true that Ricard did not wait for World War II restrictions (and so launching metal boxes) to offer the public all the items for a successful Ricard aperitif: pitchers and ashtrays, glasses and jugs. Among the Ricard by-products, we can also find bar kits (enamel plates, sugar bowls, measuring caps) or outdoor elements (iceboxes, Thermos bottles, plates for petanque tournaments, pennants, etc.). 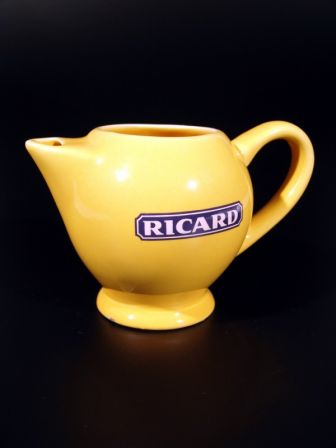 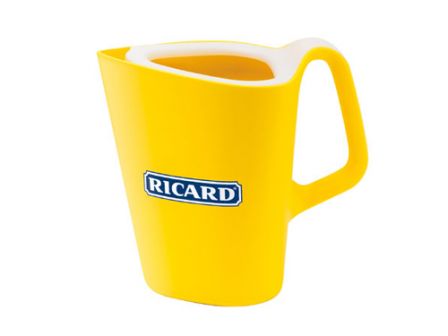 The water pitcher, adapted to hold ice cubes back, is an emblematic item. Using creators for design (then for an industrial company product) was risky at that time. Similarly, Ricard launched another initiative in design: producing limited series for them to be rare and comfort the brand prestige. Thus, in 1993, there appears the limited series called “La Provence des Impressionnistes”, with silk-screen printing on bottles. Limited series are now essential in the alcohol market for calendar events, like Christmas.

The last two rooms “New bottle, new strategy” (dedicated to the new design of the Ricard bottle, from 2011 on) and “Respectons l’eau” (the 1999 advertising campaign) are quite disappointing.. 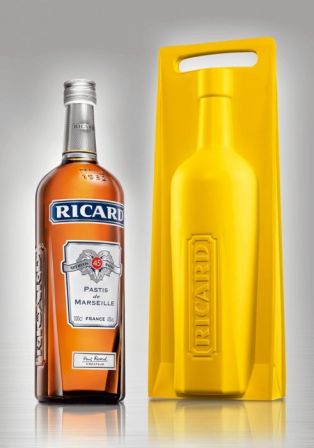 With this exhibition, we understand how inventive Paul Ricard was and how he used all the communication and public relations tools to build a universe of sun, holidays and leisure for his brand. When he leaves the company in 1968, it is the world leader of aniseed.
The Ricard Internet site describes him as a pioneer and a visionary, of course. Yet, he did not invent promotional products, as formerly seen. He did not invent corporate press either (Catherine Malaval in “La presse d’entreprise française au 20e siècle – Histoire d’un pouvoir” reveals about a hundred corporate magazines edited before 1939). But he had a fighting spirit and he knew how to make his every good idea and even to impose them on the public.

One must leave the exhibition to take a deeper interest in the character and learn about his fighting spirit during World War II: he goes into the rice culture in Camargue and buys a mineral spring in Ardèche. Moving the machinery and the employees of his factory over there, he exploits the water and distils fruits into alcohol to supply the Resistance with fuel. These actions were also aimed at preventing his employees from being the victims of STO (ie. being deported and compelled to labour for the Germans). This concern for human beings within the company was obvious in the following years.

Determined, with a fighting spirit, this public figure, who excelled in communication – as the exhibit describes him – was above all an entrepreneur. A nice story to be discovered also on the sites www.ricard.com and http://www.ricard.fr/fr/saga.html

To discover as well: Ricard’s print campaign for its anniversary: 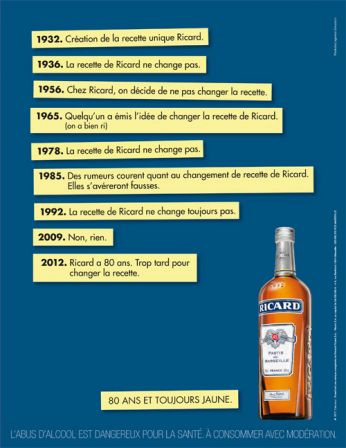 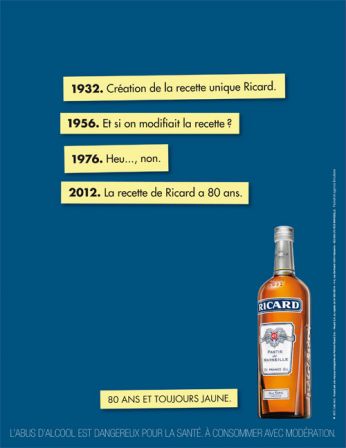 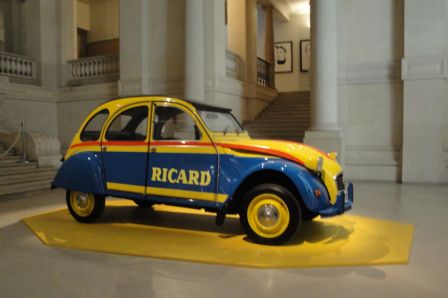 50 years of Valentine’s Days and not a wrinkle! 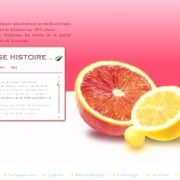 The Virtual Museum: a new window on brands
Scroll to top