There are only a few days left to see the Louis Vuitton Marc Jacobs exhibition at les Arts Décoratifs! This ambitious exhibition announces several themes and a parallel between the two men from several perspectives. Is the result up to the teaser? 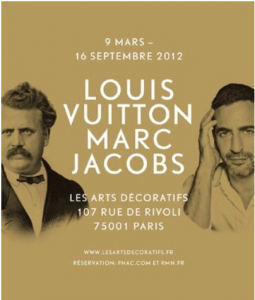 From the start and from the entrance where the portraits of the two men stand, the exhibition promises to recount the story of the two characters, their contribution to the fashion world and, above all, to reveal their interactions with art professions, technical progress, stylistic creation and artistic collaborations. Easier to say than do! The subjects are highly ambitious. But as these subjects are the ones that interest us here, we had to visit it! 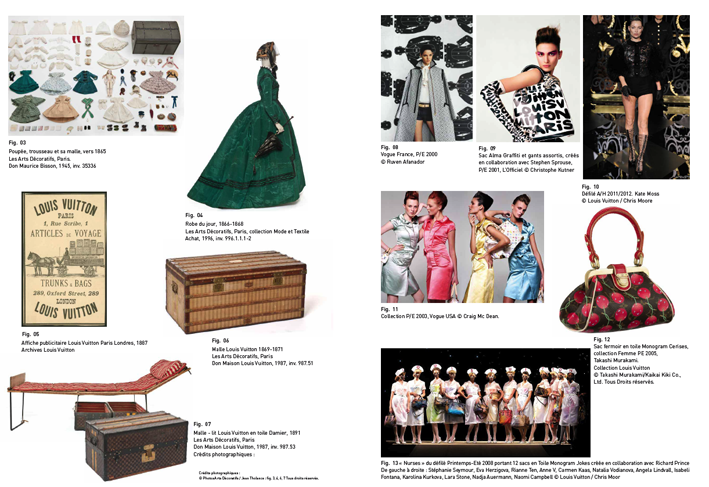 The floor dedicated to Louis Vuitton is quiet.
The walls are decorated with paneling, as in a Parisian apartment, in a dark grey. The color refers to the Trianon grey that is shown further on.

Fashion packing
Louis Vuitton (1821-1892)’s original job was “layetier-coffretier-emballeur” (a kind of clothes packing man). He improves his skill for 17 years and in 1854 opens his own shop and chooses to distance it: “Fashions Packing Specialty”. Les Arts Décoratifs offers a good representation of this profession and of the societal needs of that time. A display exhibits the wardrobe of one day: underwear, crinoline, housecoat, and evening dress. The dummies revolve on mirrors on the floor; at the far end, mirrors again. The whole thing comes with a music box song. 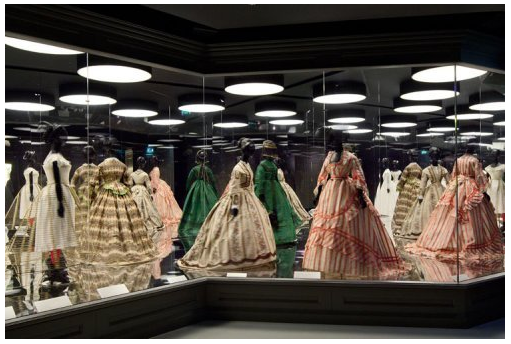 With the “ideal trousseau”, a display of doll clothes, the incredibly numerous accessories also allow us to understand the necessity of custom-made packing for moving.

Another theme presented: Paris at the end of the XIXth century.
Location and Haute Couture. The shop’s location choice in this Haussmannian Paris is a success factor for Louis Vuitton. As for Haute Couture, it brings about huge silhouettes, much variety and an exponential number of items in this silhouette. His “Fashions Packing Specialty” was visionary and his link with Charles-Frederick was judicious. 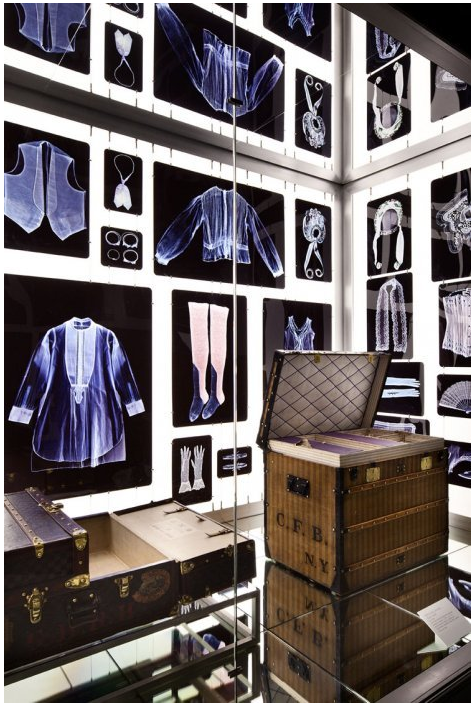 Suitcases
The rest concerns the progress made in manufacturing suitcases; and, of course, the famous canvas protecting them: the Trianon grey, the striped canvas, the checked canvas, the monogram. The exhibit also shows the inner structure to pack clothes and accessories.

The World Fairs
Napoleon III sees in the World Fairs a way of supporting industry, trade, of placing luxury within people’s reach and of “democratizing industrial art”. Louis Vuitton shares this logic and takes part in the Fairs from 1867. With each exhibition, he presents a new patterned invention. He pays attention to the availability of the products in shops. Patterns, registrations and drawings are here to bear witness to the creative richness of the era. Close to the exhibition entrance, a text specifies that Louis Vuitton lived through: 3 revolutions, 1 empire, 5 French wars and an industrial revolution. How impressive! But the man was hard-working and modest. He kept his 3 great principles:
– the mastering of his know-how
– the entire satisfaction given to customers
– the continuous search for novelty

Let’s go upstairs, to the Marc Jacobs floor.
His context is the one of globalization at the beginning of the 21st Century. In the 90’s, Couture Houses expect from their creators
1/ creative talent
2/ performance in the marketing and in the Artistic Direction
3/ a role of master of ceremonies and of brand’s spokesperson.
Marc Jacobs becomes the Artistic Director of Louis Vuitton in 1997. His mission also includes the introduction of ready-to-wear for Man and Woman, of shoes and bags. This is where it becomes complicated in terms of the exhibition conception. The things that are easy to present are:
– the artistic collaborations (with Stephen Prousse, Richard Prince…) 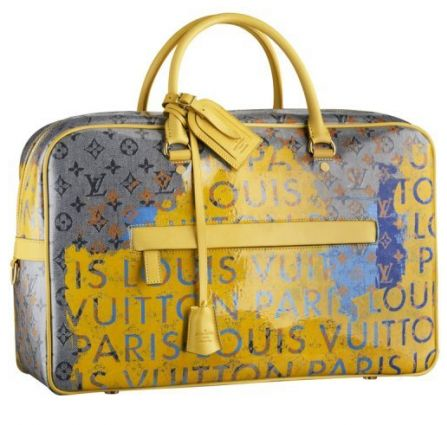 – the link with celebrities (Kate Moss…)

– the loyalty to the House’s codes:
A display shows the 5-step evolution of a bag inspired by the Speedy 30 bag.
A display is dedicated to his first collection, for which he knew he would be criticized whatever he would do. However, he did not choose the easy way, he included the monogram everywhere but hid it. A complete but hidden luxury.

Fashionistas will be delighted because his inspirations and favorite great themes are then presented. To us, this is where one can perceive the limits of the exhibition straining to keep up to its original promise, ie, to show how the man becomes part of his era and develops his industry. When entering the fashion world, the Louis Vuitton House made some changes. However the House was not turned upside down: the know-how, the crafts, the industrial partnerships are still integral part of it and Marc Jacobs did not miss them. Standing back a little more is probably necessary to understand this new turning point. 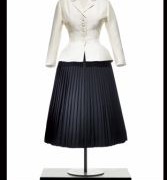 “Lingerie Française” Exhibition: the other side of a not so glamorous ...