2012 will also have its package of nice anniversaries to celebrate for brands and companies. A little review of candles to blow out.

Since 1882 – 130 years
Beiersdorf (that includes the Nivea brand) and its Hansaplast brand (the patent was applied that very year), Le Coq Sportif and Zodiac watches

Looking at the 2012 and 2011 reviews, we can easily notice that the end of the 19th century saw the birth of numerous houses, companies and products that have today become full brands, which is quite natural. This period saw the birth of industry; inventions multiplied. And so did the development of chemistry, pharmacy (and cosmetics), photography and the motor industry. The various fairs (international or World ones) also stimulated the creation of many brands.
Therefore, brands that were born at the same time as their industry have a great patrimonial charge. This is the case of Philips. In 1879, Thomas Edison presents his first bulb. Applications become widespread after 1880. An Electricity International Show is actually held in Paris in 1881. And so, Philips is created in the Netherlands in 1881, to produce carbon filament bulbs.
It is the same thing with Hasselbald, the famous brand of cameras for professionals. The conventional date for the invention of photography is 1839, when the famous daguerreotype process is presented. Hasselblad creation dates from 1841: at that time, it is a trade business, rapidly importing photography related goods. It marks the birth of a passion with the founder’s son, who takes the plunge into this field.

But, reading these dates, one is really surprised at noticing that several ready-to-wear brands well-known today were created as early as the 19th century. The ready-to-wear market comes from confection that only arises around World War I. However, with the bourgeoisie development, the 19th century sees the multiplication of dressmakers, tailors, glove and boot makers: the ancestors of today’s prestigious fashion brands.
Another remarkable fact: the concomitant births of three champagne brands in 1811-1812 – Perrier-Jouët, Charles de Cazanove and Laurent-Perrier. Champagne was worked out by Dom Pérignon in 1670, as he was the first to use the assemblage technique. While “quiet” (i.e. non-sparkling) champagne wines are quite successful in France and England, sparkling champagne is slowly being noticed, despite security problems due to gas and transport regulations. However, the transport of sparkling wines is permitted in 1728. Ruinart, the first champagne house ever, is actually created one year later. The 18th century will be the century of champagne expansion. Champagne will take its place in the court of Louis XV, in European courts and will progressively spread to provinces. Some great houses, such as Moët, date from this era. Lands belong to the nobility and the clergy. Then, La Révolution breaks out. Wine growers get the lands, but they are very poor and their very small plots are often dedicated to “quiet” wine. Champagne will have to wait for the bourgeoisie to prosper, especially through trade, to recover its expansion (an international one despite Napoleonic battles). In that context, it is easier to understand the arrival of the three champagne houses. Perrier-Jouët was actually a trading firm before starting to produce its own champagne.
For more information on the history of champagne:
http://www.maisons-champagne.com 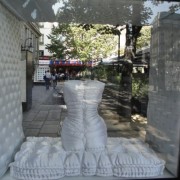 Shiseido: which artist will be selected for the Windows Art?