The history of Armagnac has therefore been epic except at the end of the 20th century. It also includes two legendary ambassadors:

D’Artagnan to start with. It is said that the most famous man from Gascogne had brought with him some Armagnac bottles to the battle of Maastricht.
Next, Armand Faillères: the first man from Gascogne to become President of the French Republic proved to be an excellent ambassador for Gascogne and Armagnac, with the decree of 1909 bearing his name, but also in L’Elysée kitchen.

The 700th anniversary: an opportunity
The B.N.I.A : The Bureau National Interprofessionnel de l’Armagnac (Interprofessional National Office of Armagnac) has taken advantage of this particular year to extend its communication and actions. The anniversary of Armagnac is actually the anniversary of a text by Vital-Dufour. A delegation went to Rome in March to look for the famous manuscript. The Vatican authorities gave the delegation a facsimile edition of the text to be presented during the peak moments in 2010.

The B.N.I.A. has also released a press ad, 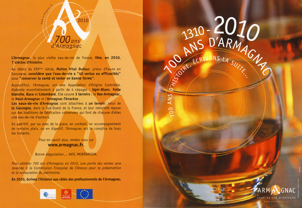 Besides many local festivities, especially in the region and during the summer. The B.N.I.A. has organized great interprofessional evenings: in London in April (at Hélène Darroze’s place – she is from Gascogne), in Chicago in June, in Moscow in September and in Paris in October.

Urban Art Box: an artistic celebration of the 30 years of presence of Shiseido...