Parisians will soon envy Wingen-sur-Moder. In this little town, north of Alsace, the future museum dedicated to Lalique, a luxury brand, is about to open. 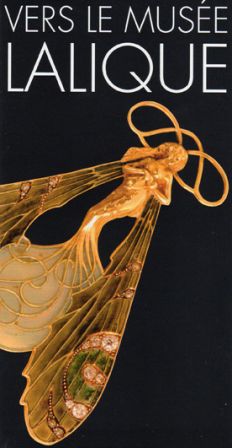 How incredible! There was no museum dedicated to Lalique House in France. On July 1st, the opening of the Lalique Museum in Wingen-sur Moder will put an end to this anomaly.

A territorial project
Why this village in the Vosges? Because this is the unique production site of Lalique, established there for 90 years. But also because this Museum is more than a brand project: it is a regional project, a common work for a common patrimony. Glass making is a tradition in the region. The Museum is actually erected on the former glass production site. Lalique is therefore the ideal ambassador for the intervillage grouping. Thus, the municipalities, the Conseil Général, the Conseil Régional – (elected councils respectively at the level of the départment and the région) and Lalique Company of course got involved in the Museum construction. They invested 8,78 million Euros, according to L’Express magazine. The items have been acquired thanks to the support of sponsors, of loans from Lalique Company, private collectors, Parisian Museums (the Arts Décoratifs, The Arts et Métiers), but also thanks to the Collectivités territoriales (administrative division with a higher degree of autonomy than a region). National decision-makers have followed this territorial craze. In 2007, Lalique had already been granted the “enterprise du patrimoine vivant” (company of the living patrimony) label. The draft for the construction of the Museum has been awarded the “Pôle d’excellence Rurale” (rural excellence center) label. And even before its opening, the Museum is recognized and given the “Musée de France” label.

Facts
For the summer tourists’ rush, the Museum will open its doors on to a collection of 550 items, a 900 square meters exhibition of drawings, jewels, flasks, hostess sets, lamps, etc. The Wilmotte agency has prepared a modern scenography: with sensory approach of the environments, touch pads, sounds, and lighting effects. 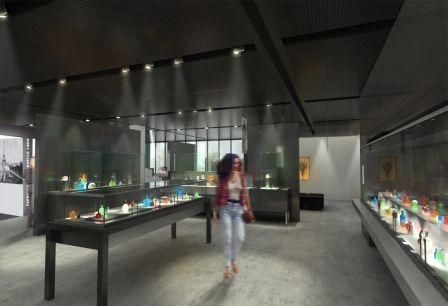 Regarding the facilities, nothing has been forgotten either: tape guide, gardens, shop, catering, and documentation. 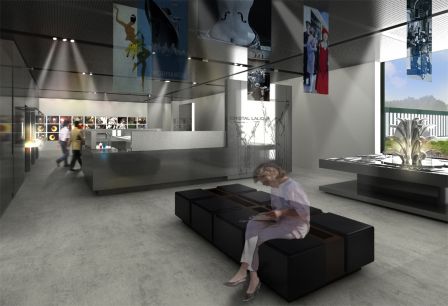 The themes
The themes of the Museum will include:

At the beginning, he draws jewels. Between Art Nouveau and Arts Décoratifs, he rapidly wins recognition as great creator. He tirelessly explores nature and woman’s body. 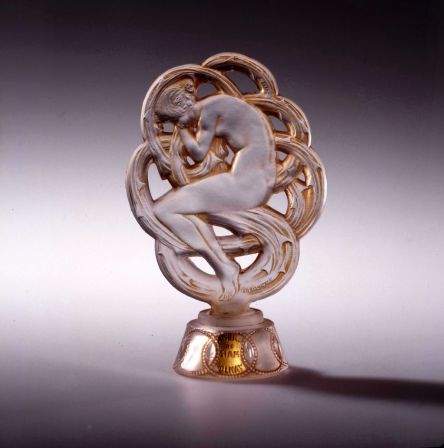 Then, with François Coty, he becomes engrossed in the perfume universe and deeply changes it by inventing the perfume bottle. From then on, he dedicates himself to glass until the end of his life. 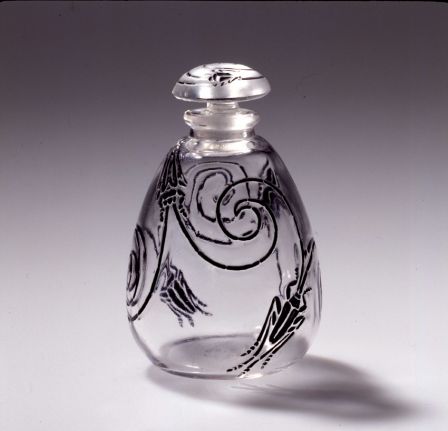 Sacred art is a less known aspect of René Lalique’s work. Though from 1929 he dedicates himself to it through stained glass by inventing a new process, or other items like his Christ de Lumière of La Chapelle de la Vierge Fidèle in Douvres La Délivrande in 1930.

The company’s context will make us cross eras, i.e. the 1900 World Fair, and allow us to meet the emblematic people that René Lalique met or mixed with: Britain monarchs, Japanese princes, Sarah Bernhardt, Calouste Gulbenkian the oil tycoon. The production technique is not disregarded: through multimedia we will be able to discover the House know-how. The production steps of the famous Bacchantes vase will be detailed.

The family
If René Lalique remains the great symbol of his House, in particular thanks to glass and flasks, his descendants also have an important place in the company history. From 1945, when his father died, Marc Lalique turned the House towards crystal. Between 1977 and 1996, Marie-Claude Lalique strengthened the House artistic dimension. Even though René Lalique is a major figure in the Museum – which was actually first called the Imaginary Museum of René Lalique during the construction – the exhibition will also give an account of his two successors’ contributions.

Let’s see all of it this summer, then! Of course, there have been criticisms from all sides pointing out the huge cost for the municipalities and the region. Yet, the official purpose of the place is to create a socio-economic dynamic in the Petite-Pierre district. Others blame the company for a mere self-promotion. Is it the reason why Lalique is so quiet before the D-day of the opening (few press releases, no references on the Internet site of the company, no link toward the temporary site of the Museum)? What does it matter? We will certainly not turn our nose up at the delight to engross ourselves into the patrimonial and artistic dimensions of such a brand!

Flashback: Lutetia by Pierre Assouline. A company faced with war

Dior faced with Galliano: in search of the magic rubber
Scroll to top