__”Bulgari – 125 ans de magnificence italienne” (Bulgari – 125 years of Italian magnificence) is the continuation of the retrospective set up in Rome for the brand’s anniversary in 2009. Enriched, it shows 600 pieces, mostly never exposed before, from private collections, such as from Elizabeth Taylor’s or from Bulgari ‘s Vintage collection. With this event, Bulgari happens to be the first jeweler to enter the nave of Le Grand Palais.
Nice teaser, then. What about the visit?__ 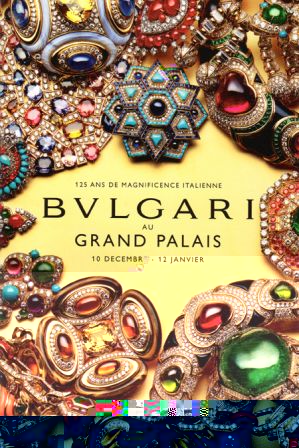 First of all, hats off for the scenography!.
The entrance is a giant structure similar to a black diamond. Already impressed, we stand in the heart of the gem. 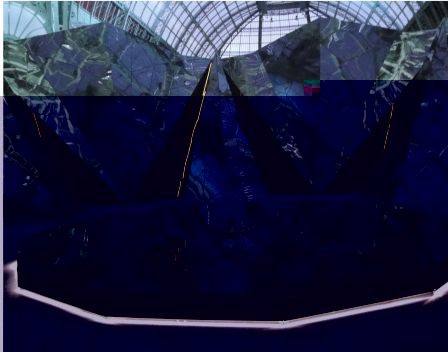 The visitor then walks into an antechamber focused on history (a chronology, a portrait of Sotirio Bulgari, the founder) and further on into a maze of black and hushed rooms where one can be dazzled at will by precious stones.
In each room, great displays show jewelry that seems to float in the air.
On each side, the atmosphere is subdued by monochrome and enlightened prints on canvas covers (geographic maps, jewels drawings, actresses’ portraits).
Onto the black floor the house badge and floral patterns are projected. 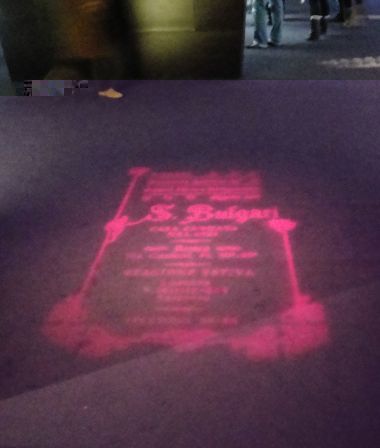 On screens hanging in the air short videos illustrate a subject of the displays.
Screen walls show old movies in which actresses appear wearing Bulgari jewelry.
Each corner is suffused with a melody or a background sound linked with the theme.
Most of the rooms have an extension, a small projection space where one can watch a video (archive pictures editing, newspaper clipping, postcards, paintings or even movie extracts) with comments to illustrate the exhibited period from a more corporate point of view.
Overall, the experience is quite sensorial, even if one does not touch anything.

How does the Bulgari House tell its story?
Through its creations to start with. The exhibition is a great catalogue to be looked at very closely.
Then, through Cinecitta, and by extension the cinema. If the Italian cinema of the Dolce Vita did not establish the brand, it certainly established its position among the greatest jewelry houses in the world. Here we are concerning the guiding principles.
The main interest for the visitor will then be to see these treasures very closely! The exhibition is indeed like Aladdin’s cave.
Besides, one learns the hues of sapphires are so varied: tangerine, garnet…

The exhibit being set up chronologically, we mostly witness the evolution, the assertion of a style, of its codes through the history of design and of the Italian, European and worldwide society.
Indeed, the visit begins with a few trays, buckles, that is to say silver pieces from the end of the 19th century that were made by Sotirio Bulgari.

With his father, he learns the principles of his trade. Then, he takes an interest in precious stones, opens a shop in Rome and turns to jewels.
From the 20’s and the 30’s, one remembers Les Arts Décoratifs, geometric patterns, convertible jewels: like a necklace turned into a diadem, a bracelet revealing a brooch. And the famous Trombino ring, created by Sotirio’s son for his fiancée. 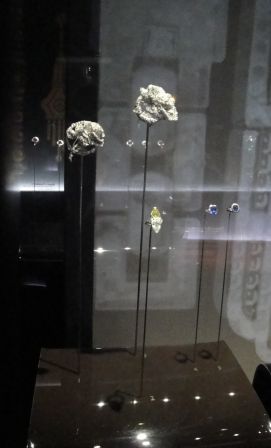 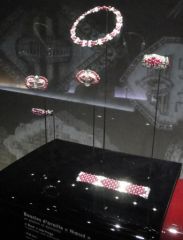 In 1940, Bulgari comes back to yellow gold, as the trade of stones is blocked by war, jewels get bigger in size.

Then we move to the 50’s and 60’s. A first room evokes the Dolce Vita era, Cinecitta, the actresses who are legendary today thanks to Anna Magnani’s collection, and the movies starring Elizabeth Taylor and Gina Lollobrigida… 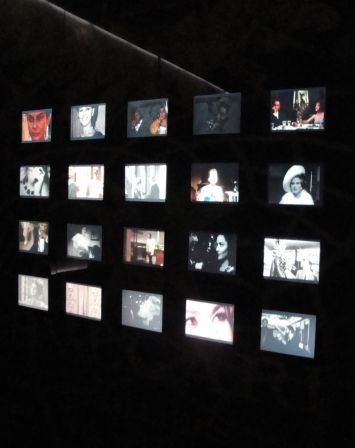 But this era is also a turning point in Bulgari’s design and style. The following pieces evoke it: Bulgari departs from the French school and finds its own style; a style inspired by Greco-Roman classicism (Sotirio was Greek and settled down in Italy in 1884), by the Italian Renaissance and Roman goldsmith’s trade of the 19th. Bulgari uses yellow gold, colors, a lot of skillfully mixed colors. 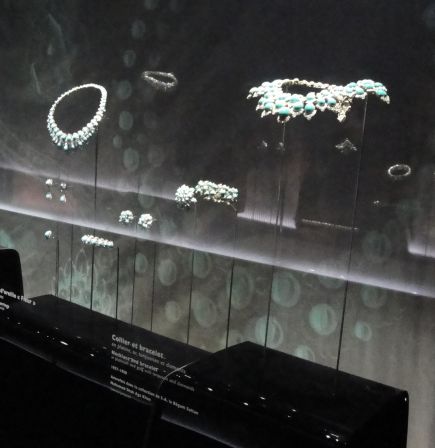 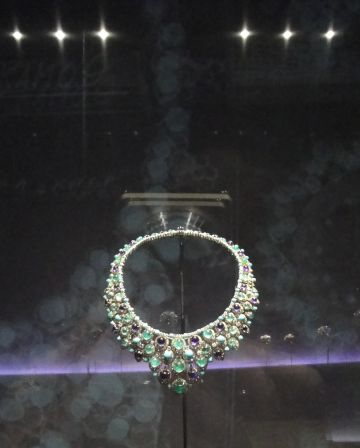 The change is visible through jewelry, but also through the Giardinetto collection and the tremblings: these floral brooches, equipped with a spring mechanism allowing some parts of the brooches to move, quite a remarkable feature. Walk heavily beside the display and you will see the little flowers wriggling and the diamonds shining around you!

Then, a corridor showing many jewelry drawings…. 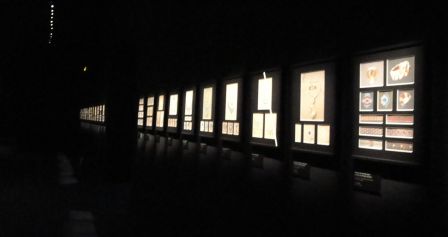 …leads us to another room conceived as the climax of the visit: the display of Elizabeth’s Taylor collection. It testifies the actress’s passion for the brand jewels. Men fought for her with precious stones and Richard Burton was way ahead.

Back to the corridor to move to the 70’s. A wall, reminding the visitor in an imposing manner of a quote by Andy Warhol, sets the tone. This was the decade of the house worldwide growth, but mostly of an eclectic (and worldwide as well) creativity. At the sound of a song by Brigitte Bardot, we discover how Bulgari tried to take away the aura of evening jewelry, by preferring yellow gold on more imposing pieces (the reflection of this era) such as very long necklaces or on pieces inspired from India or Pop Art. We can also notice a return to decorative and unusual objects: the champagne stopper, place mark or “Melone” bags.

Is the Bulgari style mature at that time? That is what is suggested by the next room dedicated to its “icons” ie. the redundant themes of the brand. With no regard to chronology this time, the exhibit compiles Tubogas (metallic ribbons), snake watches (with the Ssssssssss of snakes emitted in the background), coins and laces.

The last room, dedicated to the 80’s and the 90’s, looks less attractive. Indeed, this is the time of opulence and colors mastery. A lot of round-necklaces, pearls, nature inspirations with the Naturalia collection (in a softer expression than for the Giardinetto or the floral art of the 20’s and a purer sophistication than in the tremblings).
The 8th room is not a room. It is a huge glass cube unveiling the latest great creations of Bulgari, showing a beginning of the 21st century looking for itself between great classics and modernity. 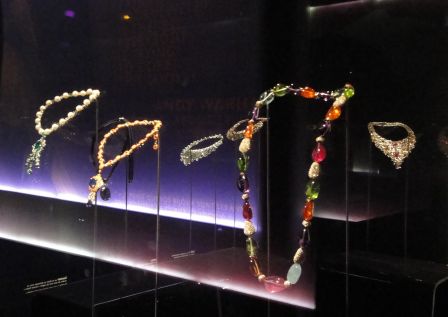 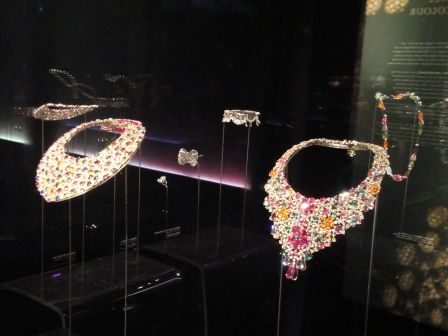 Is it the reason why we are left unsatisfied at the end of the visit?

Some lacks to be noticed however.
Legitimacy – Artistic legitimacy first. Bulgari is appearing above all as an era witness. Is this why the “I always go to Bulgari’s because it is the most important museum of contemporary art” by Andy Warhol appears, at the middle of the visit, in gold letters, as an absolute pledge.
It is the same for the legend legitimacy. The highlighting of legendary actresses, Elizabeth Taylor in particular, is judicious. Yet, the anecdotes are too few and repeated to overdose. The quote by Richard Burton: “The only word Elizabeth knows is Bulgari” is repeated again and again on wall print, on the audio-guide comment, in the movie comment…

History – Great History. Indeed, we are taught that World War II caused the requisition of platinum, leading to the use of yellow gold and the freezing of precious stones trade. But what about those families who parted with their jewels? What about the gold and stones salvage? The Belgian diamond dealers gone to the United States or England? And then? Without going up to African geopolitics and blood diamonds, the brand could tackle the historical links in production, trade and society.
– The story. We are told about Sotirio, about his vision and his sons. What about the continuation of the dynasty? The family is still present in the House though.

Production – I have read somewhere that the Bulgari exhibition lets us go backstage. Except for some drawings in a corridor, some technical explanations on jewelry production (for the example the long hours spent on the flexible necklace to be seen at the end), we learn little about Bulgari know-how, its craftsmen, its creative process. 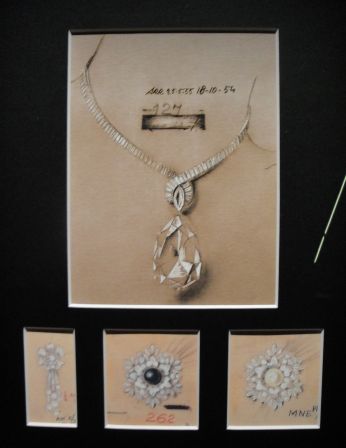 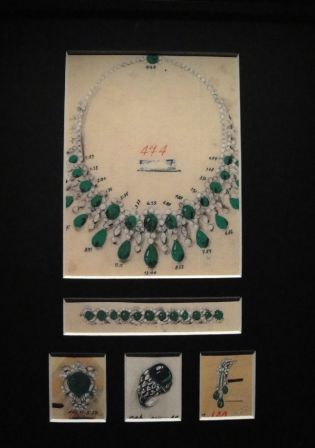 The group – Today, it is highly diversified, with not less than 52 companies. And its will is to deal with luxury globally: watches, accessories, silk, leather goods, glasses, perfume, hotel business… the list is quite long.

Today’s company vision – Strategy first. A strategy of vertical integration that, for example, recently allows Bulgari to produce watches from start to finish. Then, its values. Yet, as explained in one page of the Internet site, Bulgari has committed regarding war diamonds – following the Kimberly process – and stones from Myanmar.

What remains for us is the magic of stones and colors that make of this exhibition a fairy tale for enamored elegant women. Come on, don’t you turn your nose up to your pleasure! Even love is there: love of a job (because this is how every great luxury houses are born), love of stones, love of women. The love of a man for his woman. Because the visit ends on the true story of a loving man, who has secretly purchased a necklace – made as a diamond multicolored sapphires lace (of around 400 carats, not to say the least) and who let it be exhibited in the last display. He took the opportunity of the opening ceremony to let his beloved woman discover that her name was written just under it and therefore that this wonder was hers.

A train for Nivea’s centennial