The legacy of some brands is sometimes simply dazzling. Among them, wines and spirits are often to be found in a prominent position. But few estates can boast of such a great connection between tradition, innovation, national and international history as Château Haut-Brion. To celebrate the 75th anniversary of his family’s acquiring Château Haut-Brion, Prince Robert de Luxembourg has harmonized all the prestige and refinement details. 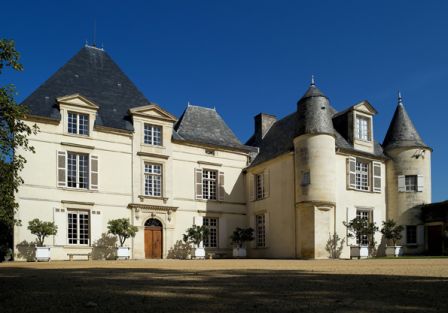 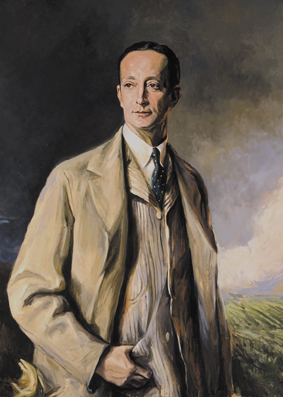 This is how an American family became the owner of a tradition and of a French wine production Mecca. It has since cultivated and enriched all its noble distinctive features.
Château Haut-Brion’s story and evolution are linked with nobility, great families’ legacy hazards, techniques development, international trade first steps, diplomacy, gastronomy and highly prestigious figures. It is rich, dense and complex. Appreciating it demands time. It is to be discovered progressively, with delight, as for the tasting of a glass of these exceptional laying down wines.

Besides respect for the soil, the processes, time and materials – which are particular to such wines production – two great traditions stand out in Château Haut-Brion’s history:

Every ancient company boasts about its culture and innovation. How could they last and grow without it anyway? This estate’s innovations have however marked turning points in wine and brands history and deserve our attention.
Let’s have a look at the brand side for a start. Château Haut-Brion could probably be the first luxury brand ever! It is indeed the first cru of Bordeaux named after its soil, not after the owner’s or parish name, in the middle of the 17th century.
In the same spirit, an innovation concerning the naming is to be noticed. At the beginning of the 18th century, due to legacies Château Haut-Brion is made to share Château Margaux’s destiny through their common manager. In 1740, the word Château is attached to Haut-Brion and Margaux brands in the trade registers. This marks the first appearance of the word “Château” in Bordeaux.
Great wines also know a decisive turning point through Château Haut-Brion. In 1663, the Château creates a new wine type: the “New French Claret”, which introduces time concerns in its production. Henceforward, wine can improve while ageing.

Numerous figures introduced these wines through their activities or travels, in France and abroad as well. Some examples:
In 1666, the Pontac family, the estate owner at the time, presents Château Haut-Brion’s wine in England: the family acquires a tavern in London, Pontak’s head. It quickly becomes a very trendy place. And, of course, wines of the estate are being served.
Prince de Talleyrand, who was once linked with the estate, was a diplomat. He was a wines and gastronomy fanatic. And his diplomacy went through wine.
In 1787, Thomas Jefferson visits Château Haut-Brion and falls in love with it. At that time, he is the United States ambassador in France. Once President of the United States, he remains faithful to his favorite wine, beyond borders and oceans.
In 1801, Talleyrand, Prince of Bénévent, buys Château Haut-Brion (only for a few years). A diplomat still.
It is funny to notice that the present owner family themselves maintain this tradition! Indeed, Douglas Dillon was the United States ambassador in France from 1953 to 1957. 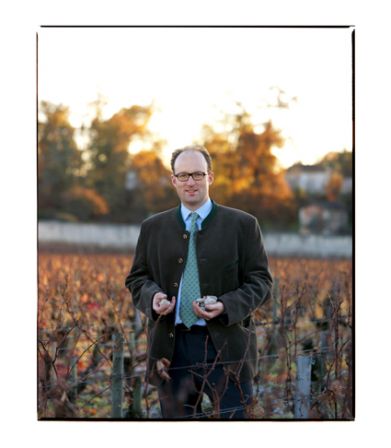 Clarendelle also shares in the Haut-Brion innovation tradition since the brand has been recently launched to enlarge the offer. The label is of course a tribute to Clarence Dillon.
And Mission Haut-Brion is a wonderful “complement” to Château Haut-Brion. 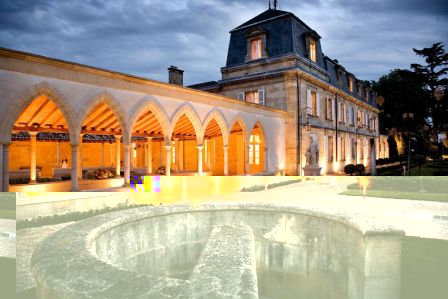 The “Mission” label comes from the Lazarist priests who lived there and gave the property its particular soul. At Mission Haut-Brion, the link to America can also be found out, since Célestin Chiapella, who was born in New Orleans, buys the castle in 1821. He introduces his wines to the United States. The Dillon family acquires the property in 1983. This acquisition is actually a perfect parallel to the property story, as Jean de Pontac’s brother in law, owner of Château Haut-Brion, had bought the original plot from Château la Mission Haut-Brion, we come full circle.

But let’s go back to Château Haut-Brion. In 2010, Prince Robert de Luxembourg expressed the wish to fittingly celebrate the anniversary of these lands of Bordeaux acquisition. This gave rise to 8 prestigious dinners organized through the world, in great capital cities.
These incredible events were aimed at presenting a few wines selected by the property to fortunate guests during dinners prepared by the greatest world Chefs, in magnificent and often meaningful places, linked in a way with the family or Château Haut-Brion history.
Invariably, large tables are laid. Plates are arranged according to haute gastronomy rules, in an inch-perfect accuracy. Flowers and glasses for tasting complete the tables. Waiters in white gloves discreetly fuss over the guests. 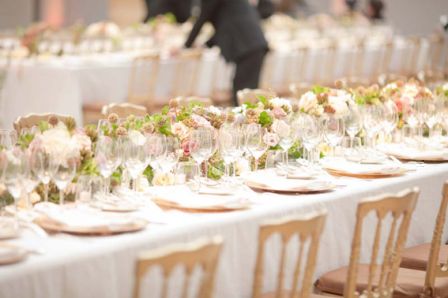 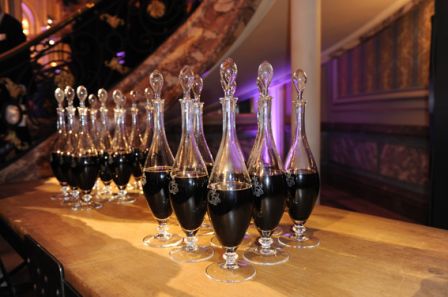 On Internet, you can see all these dinners, filmed and cut in the same way: an introduction by Prince de Luxembourg, the location presentation, and then the sommelier meeting the Chef. The selected wines are presented to the Chef, who evokes the harmonies the wines suggest and lets the menu come to mind. Then, the viewer discovers the dinner with the guests, the ballet of the dishes being laid on the tables, then uncovered, the wines being served.
The first dinner was held in Paris on May 27th, 2010, at the Académie Diplomatique Internationale (International Diplomacy Academy). Yannick Alleno, Chef of the Meurice, offered a lobster with Noirmoutier potatoes. 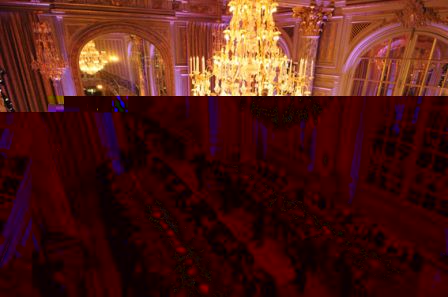 The second dinner followed the property history logic with London, on June 10th, 2010. It took place in Lancaster House, which welcomed several G7 summits – another reference to the diplomatic past of Château Haut-Brion. The Chef Philip Howard concocted a lamb saddle, shallots, and pink garlic. 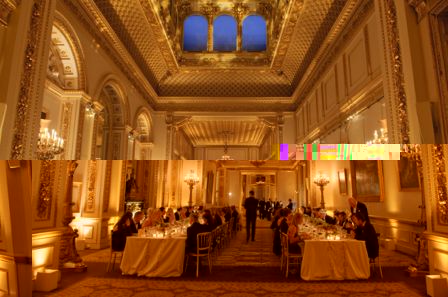 To respect the American tradition of the property, the third dinner was held in New York, on July 12th, 2010, at the Metropolitan Museum of Art. Douglas Dillon, /grand ? / great grand ? /-father of Prince de Luxembourg, had precisely been President of the Museum. During the dinner, they served a Château Haut-Brion 1935, the family’s first vintage. The Chef, Daniel Boulud, had chosen quails stuffed with figs. 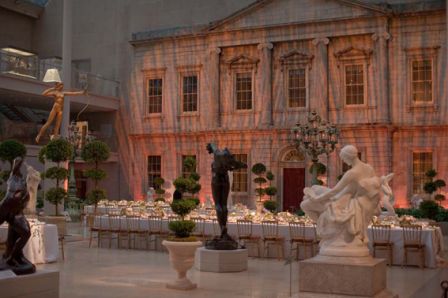 The 4th dinner took place in Shangaï, on October 18th, 2010, that is to say during the World Fair. Fine coincidence. Paul Poiret’s menu included a prime cut of beef sweet and cacao flavored.
The 5th celebration was held in Hong Kong, on October 21st, 2010. Chan Yan Tak, the only Chinese Chef to have received the three stars from the Michelin Guide, served a Pekin pork.
Tokyo welcomed the 6th dinner on October 27th, 2010. The Chef, Hideki Ishikawa, composed a land & sea harmony of 5 flavors.
In Los Angeles, on December 8th, 2010, the 7th dinner took place in Saint Vibiana, the first ever cathedral of the town. The Chef, Thomas Keller, had chosen lamb and truffle to accompany Château Haut-Brion.
The last dinner was served in Moscow, on April 14th, 2011. Anne-Sophie Pic was the Chef for this final celebration. She offered a sea bass to the guests.

In order to leave a more lasting trace than a dinner, Clarence Dillon estate also organized auction sales of commemorative caskets for the benefit of associations located in the 8 towns visited by the dinners. The caskets were made by a cabinetmaker: Viscount Linlay. They are made of a subtle marquetry and silver objects by the Italian jeweler Buccellati, were hidden in the caskets secret drawers.

To sum up, this anniversary was celebrated with elegance, various marketing tools exploring the numerous brand territories. Clarence Dillon’s initiatives, Internet sites and brochures, do not lack innovation or prestige and are quite up-to-date though very classical. Indeed, the whole communication draws its inspiration from the solid bases of prestigious wines and French refinement tradition. But it does not rest on its laurels because, in a word, one need not be modern to innovate. Knowing one’s story, respecting it, developing one’s values at present… this is how one remains the master of one’s era.

Tested for you: Fragonard perfumery