Previously, we saw how Armagnac was born and how it started development locally. What about overseas?

In the 17th century, Armagnac is being exported by the Dutch who are rulers of the sea and great alcohol traders.
The port of Bordeaux is a trading Mecca. But, thanks to the Privilège de Bordeaux (1224 – 1776), the wines of Bordeaux are reserved for the English. The Dutch are compelled to go further away to look for their wines. This is how they landed in Armagnac. Besides, the Dutch are more used to white wine than the English, who prefer Claret. Finally, the bad preservation of wine on long journeys makes them prefer liquors, which, incidentally, can improve during the journey as they are transported in barrels!
This is when this eau-de-vie is actually given the appellation of Armagnac as in ports people had to find a way of distinguishing it from others, in particular the ones from Saintonge and Languedoc. Therefore, they named it after its region of origin.

In the 18th century, the War of Independence in the United States (1775-1783) leads to a new growth of exports: the Americans boycott whisky and cognac – the favorite alcohols of their English opponents – and turn towards Armagnac. The Gascon people seize the opportunity to improve their products, to ripen the eaux-de-vie and to start assembling.

In the 19th century, le Gers is the leading wine-growing département in France. The methods evolve as well: the beginning of the century witnesses the arrival of the still pot with a continuous heating circuit, which marks a major difference with regard to cognac.

Unfortunately, the phylloxera, leaves its imprint on the end of the century. The disease spreads on the Folle Blanche, as in the Cognac area. In 1893, the harvest decreases by three quarters. At that time, the vineyards cover 100 000 ha in the mere Gers département. In 1909, they cover only 50 000 ha.
However, this period remains positive for Armagnac, thanks to the birth of Baco vine, in 1898. Baco 22A (from the rank figure this vine stock was wearing in the experimental nursery) comes from the work of a teacher of les Landes, François Baco. This self-taught-man invented the hybrid grape variety that gave another “color” to Bas Armagnac and contributed to the eau-de-vie rescue. Baco blanc is still an eccentricity in the French wine field today. Less sensitive to illnesses, it is therefore more eco-friendly.

The 20th century is the time of regulations.
The Faillères Decree in 1909 recognizes the land know-how and defines the three appellation regions: Bas-Armagnac, Armagnac Ténarèze and Haut-Armagnac.
The Decree of 1936 created the A.O.C. and the production rules, the allowed production methods.
The Decree of May 27th, 2005 gets into more details over all the specifications of Armagnac (plantation density, pruning mode…).
Finally, the INAO Reform leads to new specifications. 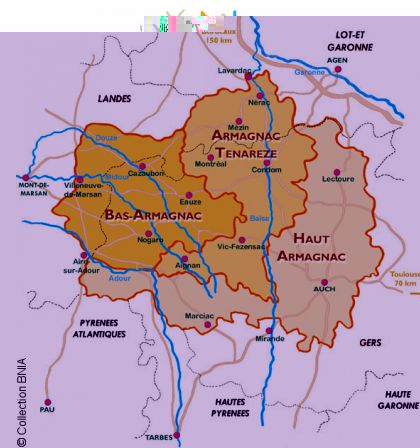 Today, Armagnac is highly controlled. 30% is exported toward 130 countries and 6 million bottles are sold per year.

Tropicana and the erratic historical discourse

Urban Art Box: an artistic celebration of the 30 years of presence of Shiseido...
Scroll to top