Blog - Latest News
You are here: Home / Advertisements / Vuitton, a traveler in History 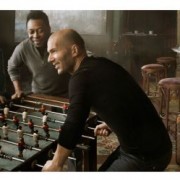 The famous brand with a monogram regularly evokes the depth of its history, a story built on traveling, while underscoring its core business: trunk and luggage. 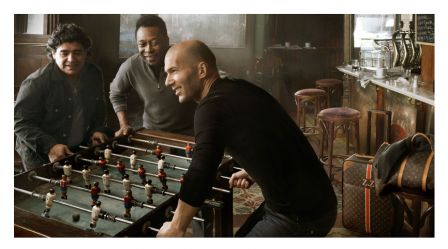 In 2008, Vuitton had already strongly claimed one of its basics: a journey is not a mere destination or departure, it is a discovery of one’s self. With Vuitton, luggage is not an ordinary thing, it arouses spirituality; traveling turns into an inner journey… Indeed, as indicated by the institutional site of LVMH, the brand built its legend around traveling. However, in the last few years, it has mostly built its communication around prominent or mythical figures: the travelers of history.

Unlike other brands, Vuitton does not aim at being surrounded with the aura of ephemeral stars or icons with strong trading powers of persuasion. No, it has freed itself from them to provoke encounters that are sometimes improbable but always of historical interest.

Thus, for the World football Cup, the brand organized the encounter of three legendary football figures at the Maravillas bar in Madrid, where Pelé and Zidane friendly played table football, under Maradona’s amused gaze. On its site “Louis Vuitton Journeys”, the brand opens itself to participative Net, offering the surfers the possibility to vote for the match scores, during the World Cup, or to get the autograph of their favorite player.
Another event goes with the campaign, because the trophy traveled in a Vuitton trunk especially created for the event. Questioned by different medias about a possible association between the luxury brand and the popular sport, the Communication Director talked about participating in a historical event rather than a real partnership.

In 2009, Vuitton had already organized an exceptional meeting of three pioneers in the Space conquest. Buzz Aldrin, the second man to have walked on the moon, Jim Lovell, the Captain of Apollo 13 and Sally Ride, the first American woman in space, were gazing at stars and celebrating the 40th anniversary of the first steps of Man on the moon… 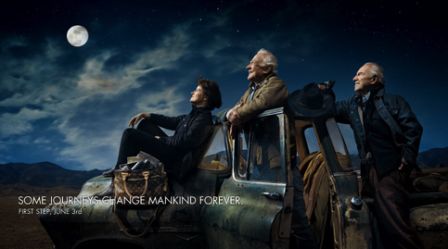 Vuitton is not in the mere historical story of its brand anymore, it participates in History, it creates it, prompts it… and so it becomes part of the legend.